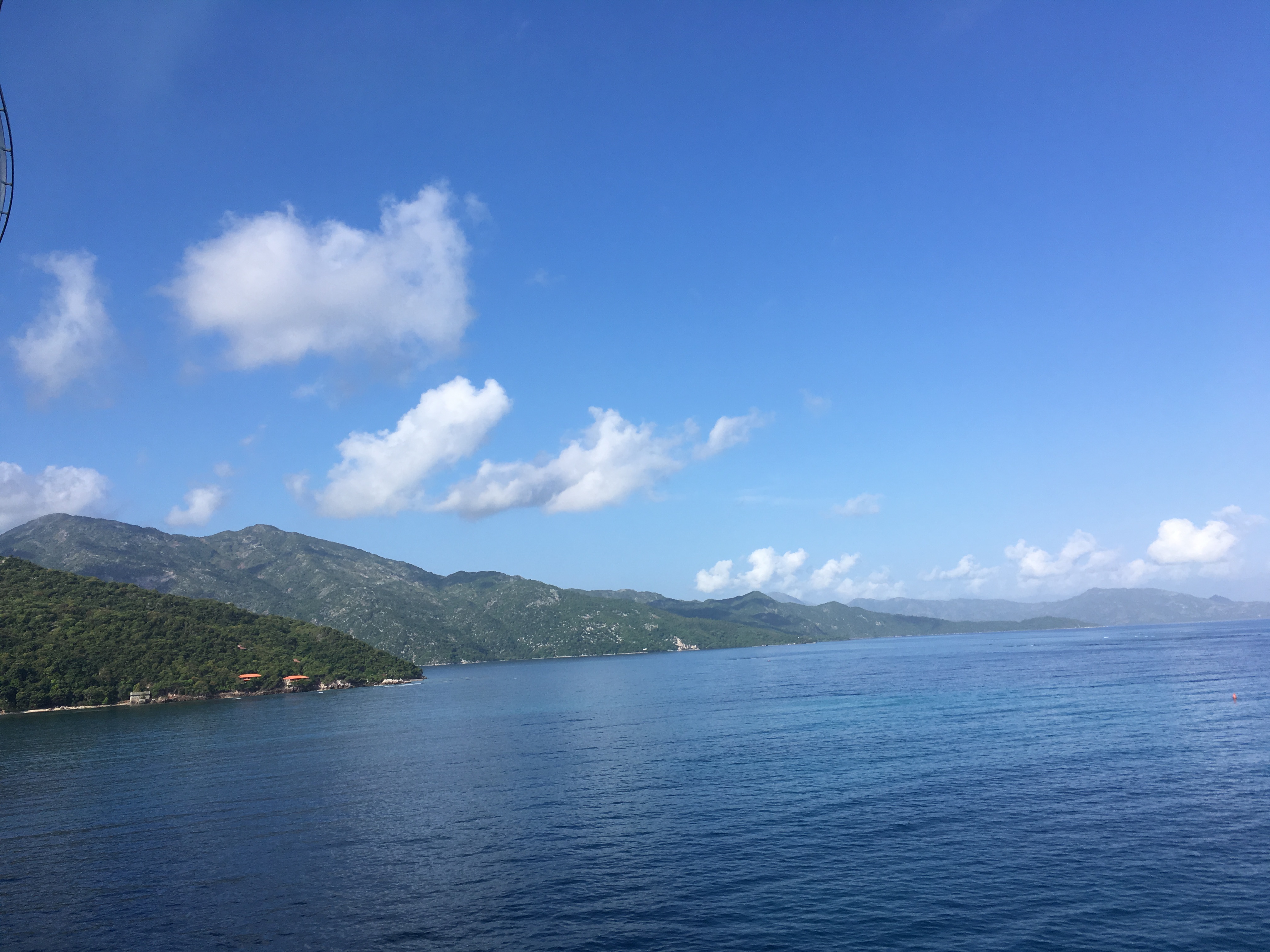 As a lot of you will know I recently sailed on my first Royal Caribbean ship, the Oasis of the Seas. But regular readers will know that Princess are the Queens of my heart! So this is how Royal Caribbean measured up against my favorite cruise line.

Royal Caribbean: The balcony itself was bigger than balcony’s I have had on other ships. However this cabin did not have an upper berth but instead it had a sofa bed. The wardrobes were built in and were pretty tiny, plus the sliding door on them was a pain in the butt. This cabin did get major points for the bathroom though which featured a shower cubicle not the curtain of doom.

Princess: In a balcony cabin on Princess you do get an upper berth which personally I prefer – Call me insane but I love bunk life on a ship! Even though it bruises my legs to bits. Princess also has movies in their cabins; I know, I know people are going to think that’s sad, get out of your cabin and explore. But I love to play a movie while I’m getting ready on a night. In terms of storage and showers: Princess has much better storage but alas it has the shower curtain of doom.

I prefer: Princess, no question! Walk in wardrobe, movies and a bunk with a real mattress not a sofa bed. I would love them to ditch the shower curtain but it is not a deal breaker.

Princess: Much more traditional in that the entertainment takes place in theatre’s and lounges. Princess, to my knowledge do not own the rights to any existing shows. But they do have production shows written for them by big names in the industry. For example Magic To Do was written by Steven Schwartz who also wrote the score to Wicked.

Royal Caribbean: In the UK, Royal Caribbean gives away all inclusive drinks packages pretty often. There was one included in our cruise fare! Unlike on other lines it did include everything, except for hot chocolate which I could not find anywhere on-board. But overall we didn’t really rate it! Nobody seemed able to make a decent cocktail, drinks differed greatly from bar to bar, as if the crew had not all had the same training. And everything was positively swimming in cheap rum…I get it I’m in the Caribbean but lay off the rum.

Princess: In the UK, Princess never give away drinks packages! I know in the US they do something called sip and sail but we are not privy to that over here. Princess does make a much better cocktail though and their hot chocolate is to die for.

I prefer: Princess, despite having to pay for a Princess drinks package it still wins the war. It is hard to beat especially because it contains premium ice cream and Royal’s did not.

Royal Caribbean: Nobody can deny that Royal Caribbean build spectacular ships and on the Oasis class I specifically love the separate neighborhoods. The only flaw in them is that they are a little insular; you can almost forget that you are on a ship.

Princess: Princess ships are spectacular in a more subtle way. They may not be full of technology but the elegance of a marble Piazza is still enough to make me giddy. Plus Princess ships are more traditional in the sense of having big windows everywhere. To allow you to watch the sea’s every mood.

I prefer: Princess! Lets be honest, if you chose to cruise then you love the sea. It seems bizarre to hide it from the passengers. Watching the sun go down over the waves as you eat dinner is one of cruising’s small pleasures. It’s a shame Royal Caribbean ruined that by frosting the dining room windows.

Royal Caribbean: The crew were polite and hardworking. Not as approachable as crews on other lines but this appeared to be because they were understaffed and often busy. Our cabin steward was a star purely because he made towel animals; I bloody love towel animals.

Princess: There is no crew like a Princess crew! They truly are the consummate host. I still miss Princess crews that I sailed with years ago, they spoil you rotten. Plus by spending the time to talk to you they can become more like a friend than a crew member.

I prefer: Princess! Royal simply needed more staff, in a Princess bar you sit and are served straightaway but on Royal you sit and wait a while.

Royal Caribbean: A dress-code does exist but it is not enforced in any fashion. People were in the dining room in all manner of things. Now, we all know I am not fussy and I love a good pair of shorts. But it is a tad disrespectful to be in the dining room in gym/swimwear looking like you’ve just been dragged through a hedge.

Princess: Do enforce their dress-code! Smart casual most nights, which is strict, the only person sneaking their shorts into the dining room is me. Even then it’s at the risk of another guest telling me I’m inappropriate.

I prefer: Princess! This will shock everyone but I preferred the stricter dress code. Purely because I don’t think you should be in the ships dining room in your sports shorts looking like you just did the Asda food shop.

Royal Caribbean: Adults only area is called the solarium. It is at the front of the ship and has a glass roof. It features a plunge pool and four hot tubs, on my sailing it was full of rowdy Americans, they were loud to begin with but the glass roof meant it echo’d.

Princess: Adult only area is called the Sanctuary, it features a full size pool, two hot tubs and an adult only sunbathing area. It is peaceful and the perfect place to relax.

I prefer: Princess! The adult only area on Royal made no sense to me. A glass roof on a ship sailing year round from Alaska would be logical but a glass roof in the Caribbean was unbearable.

Royal Caribbean: Actually have a fancy name for theirs they call it a seapass (I don’t think anyone else names theirs but correct me if I’m wrong) Plus, Royal Caribbean actually put your cabin number on the card! Not your deck number obviously for safety but your actual cabin number.

Princess: Just call it a card and it definitely does not feature your cabin number. It does change colour with your loyalty status though; I cannot wait till I’m elite to wave my black card around. But right now I’m just platinum.

I prefer: It is really petty but Royal Caribbean! I just love that someone high up thought you know what this key needs a name.

Royal Caribbean: Royals loyalty programme is called The Crown and Anchor Society. To reach its top tier you have to accrue 700 days at sea. Let me tell you they are the best rewarded cruisers at sea! Their own lounge, their own sunbathing area and priority seating for shows being just a few of their benefits.

Princess: Their loyalty programme is called Captains Circle. To reach its top tier you have to have 151 days at sea; which seems mammoth but is actually pretty low in comparison to other lines. Unlike Royal the perks are not that cool, the free laundry is probably the best thing. On Princess it is definitely more about the bragging rights.

I prefer: Even though I am pretty high up Princess’ tier system and at the lowly bottom of Royal’s. I am going to have to give this one to Royal. It definitely looks like it pays to be loyal to Royal.

Royal Caribbean: Food was plenty but actually rather mediocre. By no stretch of the imagination would you go hungry but it certainly wasn’t up to the culinary standards of other ships that offer anytime/my time dining. Plus I found certain aspects of it down right odd…I mean packets of crisps on a ship…

Princess: There are foods that I genuinely wait all year to eat on Princess. Their food is to die for in every way and it is really amazing that I don’t get off ships six stone heavier.

I prefer: Absolute no brainer, Princess! Not only is their food in a league of its own; it also offers a better experience in terms of service. Princess waiters would die of shame if you poured your own drink where on Royal they just plonk it on the table.

I think it is quite clear from this that Princess are quite firmly still my number one. But they could definitely take a leaf out of Royal’s book in regards to entertainment.