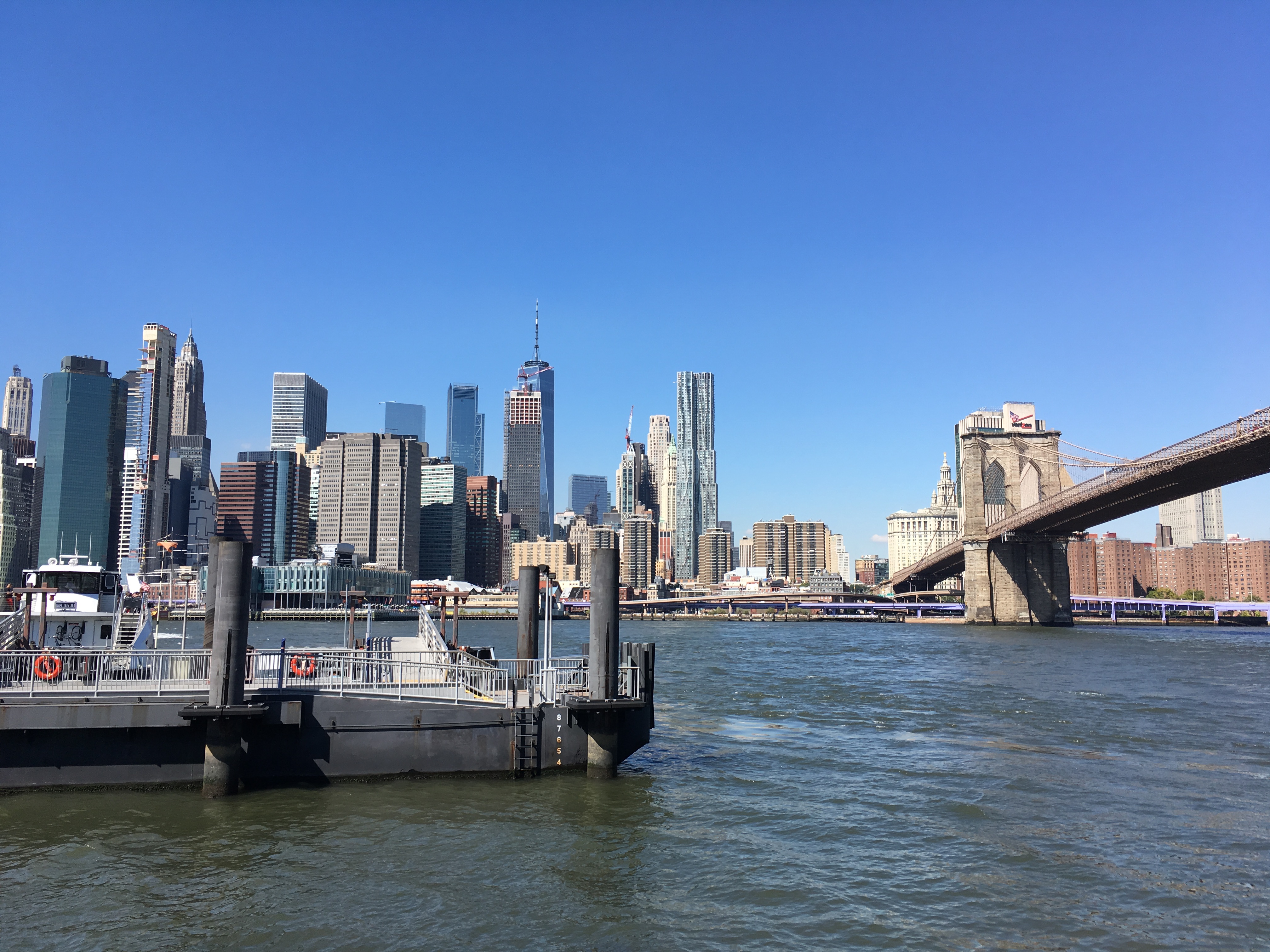 The holy grail of lost luggage had arrived! Finally, blessed with a toothbrush and clean clothes; we were able to venture out into the sunshine. Our destination was the One World Observatory, which admittedly I did get us lost on the way to (when it was only across the road…oops!).  The One World Observatory is currently the tallest building in NYC standing at 541.3 metres – To put this into context for you the Empire State Building is 381m and the Rockerfeller Centre is 266m. The One World Observatory has a variety of prices based on the ticket you buy; I for one just wanted to marvel at the view, which only necessitated the cheapest ticket of $35.

The experience was worth every last dollar, I cannot recommend it enough if you are visiting the big apple anytime soon. The SkyPod Elevators climb 102 stories in 47 seconds! Your ears will pop as you rocket upwards and the interactive screens in the pod will display the transformation of New York from unsettled land to a forest of skyscrapers. When you have reached dizzying heights, the queuing system is in an experience in itself! Now when I went early morning there was no queue however it is worth stopping to view this moving story.

The One World Observatory was part of an effort to memorialize and rebuild following the destruction of the World Trade Centre. The queue system features screens, displaying the testimonies of the construction crews who helped to build it – Who were incredibly proud of the contribution they made in re-building New York in the wake of the tragedy. The One World Observatory represents a New York that refuses to live in fear; a phoenix rising from the ashes of a crushing blow. Once you have passed through this you enter the See Forever Theatre, this audio-visual experience surrounds you with the rhythms of the city; immersing you into the heart of the big apple. Before, it shimmers away giving you the first glimpse of a spectacular skyline that will take your breath away.

The viewing platform is fully encased in glass, making it suitable for those harsh New York winters. Not to worry though! The windows are floor to ceiling and definitely do not hamper the view of the city – As you progress around the platform every angle reveals a new view of the city that spans out below you. You can look uptown to skyscrapers, spot New Jersey across the water and watch tiny traffic and minuscule people filter across the Brooklyn bridge. You could spend hours looking at that view and never get sick of it! Experts, also deliver mini lectures on parts of the city so you can learn all about the urban sprawl below you.

When I did manage to drag myself away from the One World Observatory, we caught the Subway uptown to find an entrance point to the high-line. I am not a big fan of the subway but it seems in New York your choices are: walk until your feet bleed, get on the subway or risk life and limb in a taxi…Seriously, they drive like raving lunatics! The subway won me over on this particular ride as a Mariachi band got on and serenaded everyone in the carriage. It kept me amused all day long! Only in New York.

After, a period of being lost (again) would it even be one of my blog posts if we weren’t constantly lost? We found our way onto the high-line. The high-line is a 1.45 mile long elevated park, that sits upon a re-purposed railway track. It is a fun, out of the box way to explore different parts of the city as you view them from above – Wandering through greenery in the afternoon sun it is a tranquil experience amidst a vibrant city. The high-line provides lots of places to sit down and admire the view. Plus, the sides are often lined with local artists and food vendors for extra enjoyment. I ate the most supreme red velvet ice-cream sandwich up there! Although admittedly it was a struggle to avoid getting it on my white jumpsuit.

When we reached the end of the high-line we climbed down and hopped on the subway to Times Square (alas this time there was no band). No matter, how many times I go to New York I will always be an absolute sucker for Times Square! People watching from the big red steps is simply one of life’s greatest pleasures. While we were in Times Square we made sure we visited Juniors Cheesecake as it is one of our favorite places to eat when we are in the Big Apple. Yes, I am 100% sure that this makes me a typical tourist however I don’t see any harm in it. With full bellies, we wandered down to Herald Square and explored there.

Then in true foolish style…We walked from Herald Square to the Financial District! Can confirm it felt like my feet might fall off; although I didn’t  get cankles or bleed through my socks and shoes like in 2011. So I guess we can consider it a victory! That day we walked 28km and did 40,000 steps… Let that be an example that you must always wear comfortable shoes in New York.

Otherwise known as the day Victoria, did not wear suntan lotion and discovered at the end of the day that she was rather red! The sunburn was worth it though, I would never trade a day exploring a city far from home. From our hotel, we wandered down to the river to catch the ferry to DUMBO – While, we were there we also worked out how to catch it to our ship the next day (since Princess Cruises depart from Brooklyn not Manhattan).  The ferry system is a great way to get around New York, there is far less traffic on the water! And as we sailed from the financial district to DUMBO we even spotted Lady Liberty way off in the distance.

In DUMBO, we explored the neighborhood that had changed a fair bit since we were last in the city in 2013! Then we had ice-cream which was manner sent from heaven; since we were last in New York the Brooklyn Ice Cream Factory must have changed hands, either that or it just really stepped up its game. Gone are the basic flavours of the past! In its place is a new array of treats that definitely make it hard for you to narrow down your selection. Not only was the ice-cream out of this world there is also no better place to eat it – We sat on the boardwalk that surrounds the dock, a gentle breeze blew of the Hudson into the stunning heat of the New York mid-morning; across the river was a beautiful view of the city skyline and off to one side the Brooklyn Bridge stretched into the city. It is the perfect place to both admire the Big Apple and people watch. All while enjoying a beautiful sugary treat!

After, morning ice-cream (because lets be real if you don’t eat ice-cream on a morning are you even on holiday?) We caught the ferry back to the financial district. If you are a first timer, to the city I recommend that you walk over the Brooklyn Bridge to get back to the city. But if you are not a first timer and your feet are as sore as ours were then the ferry is cheap and easy. From the financial district, we walked to China town (Yes, there was more getting lost…Along with the seemingly annual tradition of my Dad asking a police man for directions). But we eventually reached the eccentricity that is China Town, it is definitely another world within the city, a small pocket of madness. After, a meander through China Town we progressed through to Little Italy – Another tiny piece of the city with a life and culture of its own. I highly recommend that you visit both of these places on a New York trip they are definitely an experience in their own right.

From there we safely made our way back to the Financial District (everyone cheer that we did not get lost on the way) and explored the area. Outside of the Westfield World Trade Centre there was a food market going on, selling foods from around the world. Unfortunately, I am a bad travel blogger and didn’t pay enough attention so I don’t know if this is a regular thing. From there, we stepped inside the centre which is a wonderful piece of architecture! It definitely seemed to be a commonly held view that it was a marvel as there were tour groups in there snapping pictures of the structure (that quite frankly looks a bit like a dinosaur). We also did the typical tourist thing of shopping! But I have no shame, Century 21 is a treasure trove of bargains and a girl needed American snacks to pack in her suitcase for when she was miserable on her return to the UK.

That night we went to Harry’s Italian for dinner, which was the definition of American portions! Never have I seen a bowl of pasta so big in my entire life. Although to be honest, I would eat carbs forever and I definitely appreciated it after a day walking around the city. Day two, saw us walk 32,000 steps! But it was our last day in the city and our feet had a whole week of luxury cruising to re-cover (well sort of re-cover…Regal Princess is a big old ship after all).

This elephant will forever remind me @travelblogjamie 😂🐘
This was my favourite dome projection onboard MSC Virtuosa 💙⚓️
Brave & free & wild as the sea 🌊⚓️
Rob says morning from Portland!! ⚓️🌊
Back where I belong 🌊💙
On @msccruisesofficial a picture on the spangly stairs is an essential! 🙌🏻✨