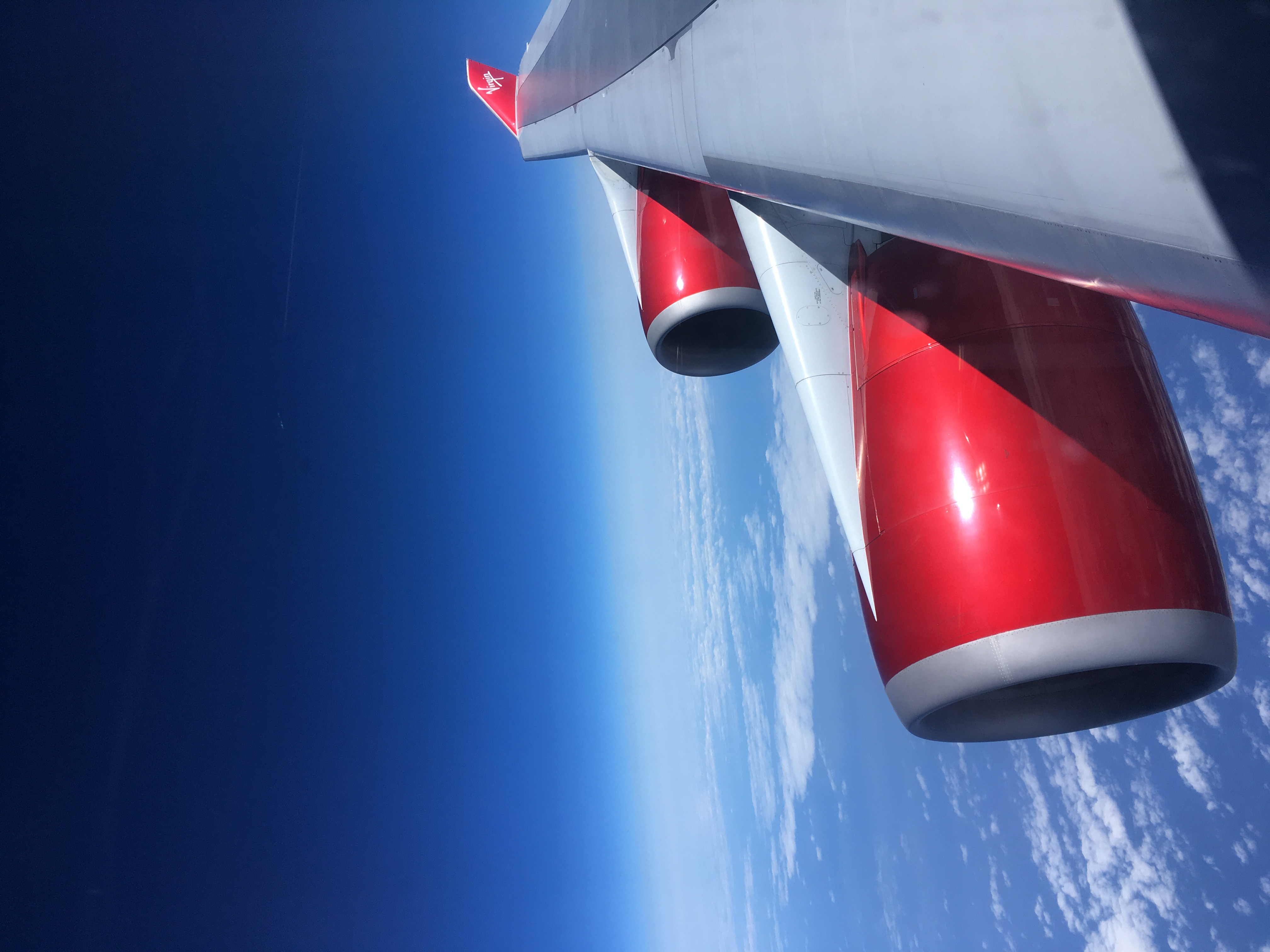 Barbarella, a Boeing 747-400 was a big old girl! The white of her paintwork contrasting to the rather miserable morning in the North West of England. She was going to take me away from the constant grey skies; as this Virgin Atlantic flight was flying nonstop from Manchester to Orlando.

I had flown Virgin once, almost ten years ago. But I must profess all I remember from that flight is that my fellow passengers were rather strange and that Virgin gave out Choc Ice’s a novelty that amused me deeply. After that, when flying Transatlantic I was most likely to be found on a British Airways flight. As much as I love British Airways I was excited to give Virgin another try. Okay, so mostly I was excited by the fact that the plane was a double Decker…But I’m sure I’m not the only person who has ever been amused by that.

The most important things when flying are:  Seat, food, entertainment and crew. So let’s talk about each in turn and I will also mention how they measure up against my previous experience with British Airways.

Seat: Whilst this was quite possibly the cleanest aircraft I have ever set foot in. The seats definitely gave away the age of the aircraft. She was not the newest and it was quite clear from the seats; that over the years she had ferried millions of passengers to beautiful destinations all around the world. The seats themselves were a touch narrow. Not terribly uncomfortable just noticeable when you are sat in it for nine hours. It is worth noting that I did not fly home on Barbarella but Tinkerbelle and while her seats showed less wear and tear, they were exactly the same in terms of comfort.

In terms of the seat war, I would have to say that British Airways has more comfortable seats. They are just a little bit wider and slightly more padded.

Food: Now this is definitely a mixed bag…On the way out to Orlando I can quite safely say that I have never eaten so much on a flight! Shortly, after take off we were served a snack of mini pretzels. This was followed up by our main meal; a note on how the meals work on Virgin is that you are actually given a menu with three choices on and you select the one you would like. I selected cottage pie and while it was not the best thing I have ever eaten it was certainly one of the better things I have eaten on a flight. Next to be served was mini twister ice lollies which amused me greatly, especially because the flight crew looked like theatre usher’s handing them out from little tray’s they wore on straps. Then to top it all of we were served a what Virgin called afternoon tea before we landed. Which was a sandwich, crisps and a cake, much like a packed lunch you would eat as a kid.

The flight home in comparison was a night flight so we were served a main meal and then breakfast. The only things I ate on the way home were a cheese stick and the red velvet cake that was provided as desert. I must profess I found the food on the way home vile. But I do acknowledge that menu items are merely a matter of taste and I am quite a fussy eater! So I won’t blame them.

In terms of food, I would say that Virgin were the definite winners. I can’t remember ever liking the food on British Airways. In fact, I think on more than one occasion I have made it all the way to America having consumed just a bread bun.

Entertainment: Virgin provides a seat back entertainment system in the form of a little touch screen TV. This entertainment system named VERA is pre-loaded with new release movies and a variety of TV shows. It also has options for kids and a range of interactive games you can play. You can view what movies will be on your flight in advance on Virgin’s website. Although it is worth noting that you can only view the movies that are airing during the month of your flight, for example, my flight departed on April 26th and that month’s movies were released on April 1st.

In respect of entertainment I’d have to say that for me it was a draw. Regardless, of what long haul flight I am getting on I get excited for all the new movies I can watch on the way to my destination. Although I definitely have a bad habit of singing to everyone else in the cabin…On my last British Airways flight it was Les Mis and on this flight it was The Greatest Showman. What can I say? I’m a complete sucker for a good musical.

Crew: My flight crew on the way out were incredibly hardworking! We were on that flight for nine hours solid and I never saw them stop once. I was also sat right next to the crew galley so it was amusing to see them fix each other’s hair and make up to maintain that perfect flight attendant image. It provided a tiny glimpse into their world.In contrast, I never saw much of the crew on the way home. I was sat in the second storey of the aircraft or what is referred to as the bubble; this is a small section of the aircraft and as such is only served by one member of the crew. The crew member in question did not do as many rounds as it was a night flight and for our comfort Virgin opted to keep the cabin as quiet as possible. But she was just as friendly as the bunch we had on the way there.

Much like the entertainment section this is also a draw, I have had excellent crews on both airlines. As Walt Disney would say “it takes people to make the dream a reality” and their crews are definitely a credit to them.

On the whole Virgin Atlantic made the flight as enjoyable as they possibly could. They do the majority of things very well and I would not hesitate to fly with them again. I loved the novelty of sitting in the bubble and they also get brownie points for flying nonstop into Northern airports. Transatlantic flights are a long enough trek as it is without having to make stops on the way there.