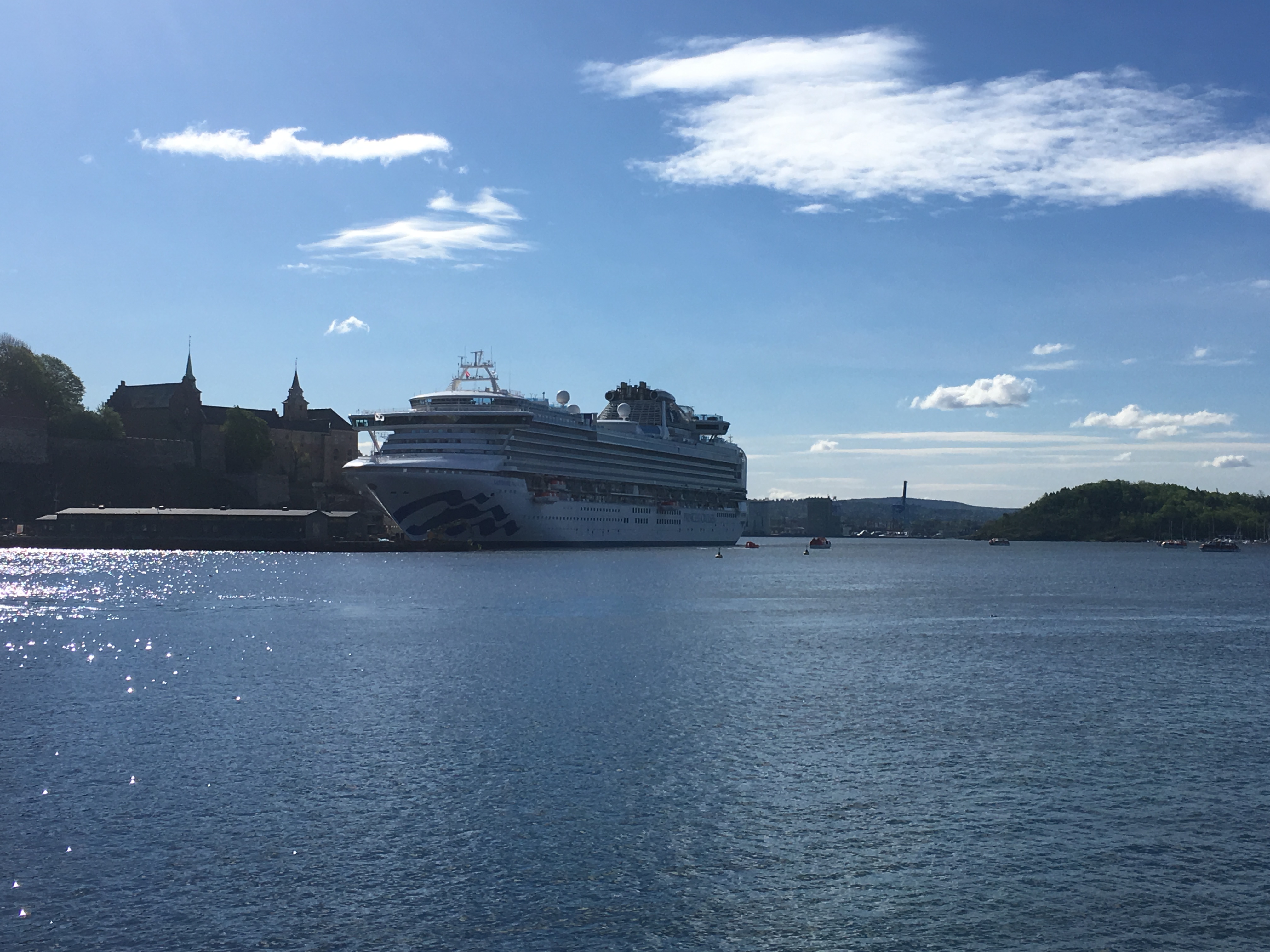 Sapphire Princess, how I wish I was still on you! Sapphire Princess was launched in 2004, making her the grand old age of 15 years old – To this end she is also the oldest Princess ship I have sailed on; she was also the smallest Princess ship I have ever sailed on holding a mere 2,670 guests (any non-cruisers reading this will think how on earth is that small!? But once you have been on a ship that holds 6,360 passengers, yes I am looking at you Oasis, then 2,670 really doesn’t seem much) But neither her age, nor her small capacity made her any less beautiful. Sapphire truly is a gem of the sea’s! And I am honored that she allowed me to experience my first ever cold weather cruise.

Despite the forecast of storm Hannah, we arrived to find Sapphire basking under bright blue skies. The spring sunshine perfectly complimenting the royal blue sea-witch painted across her bow. Thanks to loyalty status, I got priority boarding and I went from shore-side to ship in approximately ten minutes. Something I did notice was that they have done away with the health questionnaire that you used to be required to fill in when entering the terminal. No doubt this contributed toward speedy embarkation for everyone.

Anyway, I was glad there was hardly any wait because that meant that minutes later I was home! Exploring the ship with all the energy of a hyperactive toddler. Interior wise, she is pretty similar to the Caribbean Princess who I sailed on long before this blog came into existence. The main interior differences being: that she has more main dining rooms and Skywalkers is not in that iconic trolley handle toward the aft of the ship. The open decks however were pretty unique! She is the first ship I have sailed on that has a covered pool, perfect for cold weather itineraries. She is also the first ship I have sailed on that provides such easy access onto the Bridge wings. Which are a great spot to watch sail away or to re-create the Titanic, you know whichever floats your boat.

The one flaw in the glory of that first day was that we didn’t do what ships were designed for…We all got on full of hope that we were going to move but it seems that was not to be. The windy weather meant our 4pm sail away slot became a 7pm sail away slot and eventually a 10:45pm slot. In the end we left Southampton at 11:15pm…Needless, to say our first port of call was cancelled. Now I was initially annoyed by this as the scheduled port of call to Brugge was on my birthday and all I wanted for my birthday was to eat all the Belgian chocolate! But I got over it pretty quickly unlike my fellow passengers…

The level of moaning, ranting, raving and whining about Brugge was ridiculous and it lasted all week long! God bless the ships officers for having the patience of saints, if I was them I would have screamed ‘GET OVER IT!’ at the top of my lungs. I will admit some of the moaning was amusing like when the Captain was nicknamed Captain Cautious, after he had missed two ports of call in the span of two weeks. But most of it was just stupidity! I mean…I heard someone say “I don’t like sea days! I don’t book sea days!” If you don’t like the sea you probably shouldn’t cruise…

Brugge was not replaced with another port of call; leaving us with two sea days to get to know the ship. As I usually do in these ship reviews, I am going to break the analysis down into sections. That way if you only want to know about one particular thing you can skip ahead!

We had a standard inside to the aft of Baja deck. I love an inside! Anyone else an inside cabin fan? The cabin itself showed none of its age and I loved the addition of updated flat screen, interactive TV’s with an on demand movie service – Which I believe were put in during her re-fit last year. It is also worth noting that despite Sapphire being a teenager there was no engine noise at all in the cabins. None of the constant hum I experienced on Crown a couple of years ago, you can read all about that cruise here.

Before we set sail I had joked that Princess luxury beds/bedding did not apply to you if you slept in the bunk. Unfortunately I was right…Princess luxury bedding means that they no longer use duvet covers; they merely wrap the duvet in a fancy sheet. Now I am not a fan of this in general as I don’t think its very hygienic. But I could have dealt with it if the duvet was white and clean looking. But I can confirm that the duvet on my bunk was yellow…I am not kidding, it looked like 1,000 other people had sweated into it. And this is where the normally flawless Princess service failed us a little bit. We rang guest services and they said someone was coming, nobody came…We rang guest services they put us on hold…We rang guest services and they put the phone down.

If this had been my first Princess cruise it would have put me right off! But thankfully Princess is a brand I know and love. They reminded me exactly why I loved them when they hastened to apologize and rectify the situation. Enrique from Guest Services was a star! If anyone from Princess reads this (wishful thinking I know) then give Enrique a raise. A brand new white duvet was placed on my bunk and the sweetest apology presents were placed in my cabin. Seriously, they made my day! I hasten to add that the ship was spotlessly clean in every other respect, as Princess ships always are and after this we had no issues.

Although this cruise was my Christmas gift; we did book it specifically because it fell over my birthday. My past three birthday’s have been spent in Malta, in Walt Disney World Florida and now at sea (I guess you could say I’m high maintenance) Although I had envisaged exploring and eating Belgian chocolate on my special day; a sea day was definitely not the worst way to spend it. I don’t know about you but I am a sucker for a sea day! I would gladly go on a cruise to nowhere that just bobbed about in the ocean for a week.

Princess were of course the consummate hosts! Popping a Happy Birthday sign on my cabin door, alongside some celebration balloons. They also left a little card in my cabin that I could hand in when visiting the main dining room. Upon handing this little card in the waiters will sing to you and bring you a celebration cake. However I opted not to do this, as I find nothing more embarrassing than people singing Happy birthday, couldn’t tell you why something about it just goes through me.

The first thing I noticed before I had seen any of the official entertainment, was that Princess had taken to playing up to date pop music around the ship. Now I can’t tell you how happy this made me! I felt like Princess had heard me, Princess have been my favorite line for years but their entertainment is often from well before my time. This seemed like a positive sign that the constant Beatles revivals had been thrown out of the window. The rest of the cruise confirmed they had been. Yes! Thank you Princess, young people cruise too.

The guest entertainers on this ship were some of the best I have ever seen on a Princess ship! Among them were Gareth Oliver the ventriloquist of Britain’s Got Talent fame. Who had everyone in fits of laughter, I’ll tell you what, if laughing adds years to your life then he ensured we would all live to be 100. Phillip Brown who spent many years playing Mufasa in The Lion King on London’s west end – Had a witty personality and an electric stage presence that lit up the Princess theatre. Plus that normally lame Beatles tribute had been replaced with a Take That tribute.

Princess also appears to be making a habit of featuring their cruise staff or as they are now called Assistant Cruise Directors. With a couple of them headlining the lounges and displaying stunning vocals. However I did miss the game shows that are normally run by the cruise staff, for example there was no: Newlywed not so Newlywed, Liars Club or Quest. On a whole though they are definitely improving on the entertainment front and I am sure they will find the perfect balance in time.

The food as it is on all Princess ships was absolutely to die for! We particularly enjoyed the updated menu in Alfredo’s; which became our regular lunch time haunt. I swear by the time we debarked my body was 50% pizza and 50% hot chocolate because let me tell you something if you haven’t had a Princess hot chocolate you haven’t lived! Plus, it would be a shame not to drink gallons on your first cold weather cruise right!?

The only thing missing on the food front was that Sapphire did not do the baked Alaska parade! When we inquired as to what time it would be we were told that it would only be taking place in the dining rooms reserved for set dining. Which we found very disappointing as it is one of our favorite Princess traditions.

That’s it for now I’m afraid! I am actually going to write a whole separate post on the ports of call. So you can look forward to that in future! As you can probably tell from this post, I wouldn’t say that this was my favorite Princess cruise. But I got along with cold weather cruising much better than I thought I would and as we crossed a wet, windy north sea I realized there was no place I’d rather be. Princess you are HOME! And I will sea you in September for a new adventure.