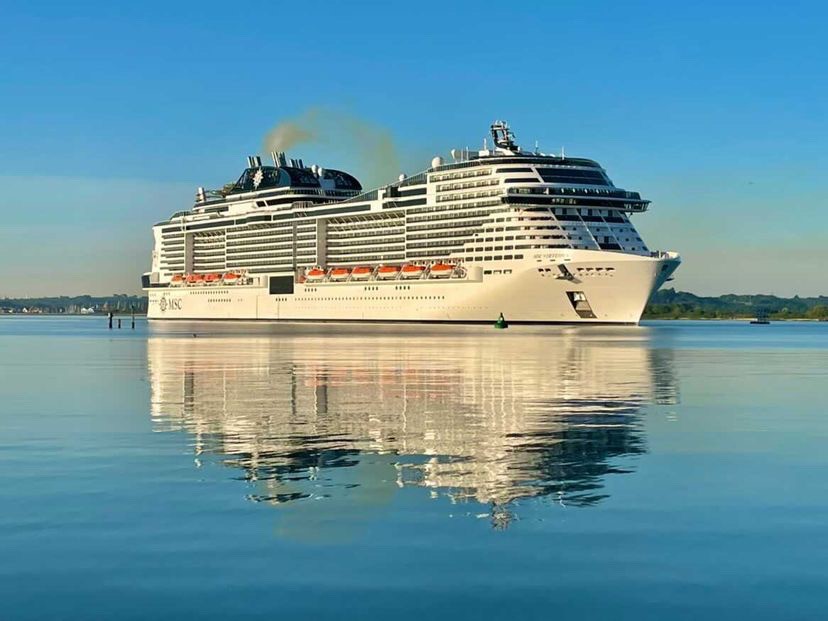 The tag line MSC used to promote MSC Virtuosa was that she was a “Masterpiece at Sea”. Let’s evaluate whether she is a great work of art or whether she would languish in obscurity at the back of the gallery.

I have discussed the boarding procedure (slightly different because of Covid) in an earlier post which you can read here. Of course, the first thing you do once you board is find your cabin! Which I will admit was ever so slightly more confusing than normal…Usually, cruise ship corridors stretch on forever and as long as you are walking in the right direction you will find your cabin eventually. I was surprised to find that Virtuosa’s corridors had twists and turns in them which was slightly disorientating but it did not take long to adjust to.

The decks on Virtuosa are named after famous composers, our cabin was located on Tchaikovsky (which thrilled the dancer in me endlessly). The cabin was bright and bold with a bottle green colour scheme, in a surprising twist this three berth cabin did not have an upper Pullman it had a sofa bed. Everything was brand spanking new and spotlessly clean. The brilliant things about this particular cabin were: the huge shower (definitely the biggest we have experienced at sea) and the powerful hairdryer (if you are a girl who cruises you will understand the frustration surrounding cruise ship hairdryers). Our cabin was looked after by the amazing Lerry who made an array of towel animals throughout our short stay.

However, as a family, we felt that this was the smallest balcony cabin we had ever had! It was long and skinny rather than a traditional square configuration and with three people living in it, there wasn’t always room to manoeuvre. Speaking of small whoever designed the storage space must be the lightest packer EVER! The wardrobe space was positively tiny – if you were a family sharing for 5+ days I fear you would have to live out of suitcases…One other aspect that could do with some tweaking was the bin! Yes, you heard me right. MSC (like most cruise lines these days) are doing their best to be environmentally friendly, they encourage recycling within your stateroom and to this end, the bin is dived into compartments. But there was actually no compartment for just general waste…

I don’t know about you but after I have located my cabin I go exploring! There is one word, to sum up, the public spaces on Virtuosa and that is that they are stunning. She is a ship that inspires moments of awe. Whether you are marvelling at the Galleria, admiring the huge expanse of windows that allow the outside in, stepping into the future as a robot serves your cocktail, feeling on top of the world in the sky lounge, braving the Himalayan bridge or racing down a water slide. You will be amazed from morning till night!

A few of my personal favourites during my sailing were: Wandering up and down the Galleria Virtuosa with an LED Dome that changes frequently no two experiences were ever the same, plus this is a great place to people watch! Watching the world go by from the high up vantage point of the Sky Lounge – the view in here was simply to die for I could have sat and watched the waves for hours on end (plus when you order a hot drink they serve you chocolate! Chocolate and the perfect view, what more could a girl want?). Eating pizza on the open decks and racing down waterslides. Virtuosa has three amazing waterslides plus an aqua park to amuse the young and young at heart (believe me I was greatly amused by watching a bucket of water empty on Travel Blog Jamie’s head). Plus the water is heated so no fear if you are sailing around the UK and it is a little bit chilly.

On a ship of this size, you are always going to be able to find something to do. But unfortunately, the actual organised entertainment let MSC down. The comedian who was on board was most definitely not funny! I recognise, that whether you find a comedian funny is absolutely personal taste but I found that lots of his jokes were generic and I had heard them from cruise ship comedians in previous years. The Motown group the ‘Soul Sisters’ seemed under-rehearsed and had to look at each other for visual cue’s – I did wonder if this was to do with the pandemic, maybe they had only had the opportunity to rehearse over Skype and were unused to being together as a collective. The theatre show was quite frankly one of the most bizarre experiences of my young life! It made very little sense, if you are curious as to what went on during it you can watch me describe it in this vlog belonging to Jamie.

Having said that the live singers dotted about in venues across the ship were actually of very good quality! Much better than singers/bands I have come across on previous ships. Plus, the entertainment staff were charismatic and friendly and did a wonderful job of pub quizzes etc. I understand that MSC’s entertainment is usually hit and miss as they cater to a large audience all of whom speak different languages. However, on a sailing full of British nationals, arguably an easier audience, they appear to have missed the mark.

This is where it unravelled for MSC! Individual items were beautiful, they made good pizza, hearty pub food and a bloody good hot chocolate. But on the whole, I absolutely understood why people criticise the food when sailing MSC. First of all, I will just say that there is lots of variety – over the years MSC has been criticised for only serving European food. That was absolutely not the issue here, the issue really was that food was of poor quality. It was often poorly presented, cooked incorrectly or arrived with items missing. The staff in the main dining room appeared overwhelmed despite the ship not being at full capacity; this may have been due to it being a brand new ship but on the whole, the dining room experience on MSC was poor.

If you are sailing MSC Virtuosa in future and you want to be guaranteed a good meal I would recommend: Trying out the pub food in Masters of the Sea or grabbing a slice of pizza on the pool deck. I also heard that Hola! Is the place to be although I did not dine there myself. There is potential for the food to improve, it is definitely not a lost cause, but it let Virtuosa down. I also, felt that the lack of a complimentary venue that was not the main dining room, pool deck or buffet was a real shame. Princess has International Café and Alfredo’s, NCL has Blue Lagoon now rebranded O’Sheenans, Royal Caribbean has Sorrento’s Pizza and the Park Café. MSC is missing a trick here though I do know that speciality restaurants will simply make them more profit.

The staff were so overwhelmingly lovely that I struggled to remember if the crew had always been that peppy or if they were simply glad to be back at sea with the guests. I suspect it was a combination of the two! And we were just as glad to be reunited with them as they were to be reunited with us. The crew were a credit to MSC in every way. They were friendly, attentive and approachable from dusk till dawn. One thing that I did find slightly odd was that you simply did not see the senior members of the crew. On other lines I have sailed with the senior members of the crew can often be found in public spaces chatting to the guests. On MSC if you did see a senior member of the crew they passed through the public space quickly and silently. I even had one waiter remark to me that the crew never see the Captain!

Considering I sailed on MSC Virtuosa during a pandemic this was the most important thing….She was absolutely pristine! At no point during my sailing did I have to worry about anything being unclean or messy. The housekeeping staff did a wonderful job of making sure that Virtuosa was shown off to her full potential; with all of her surfaces glittering in the glorious summer sunshine that blessed our UK sailing.

Was MSC Virtuosa truly a masterpiece?

The answer to that is that she absolutely was! Yes, there was room to improve but she was astounding in so many ways and I would sail on her again in the future. If you are looking to escape the mundane, if you need a break from the chaotic world that we have lived in for the past couple of years, then MSC will provide you with an escape aboard MSC Virtuosa.