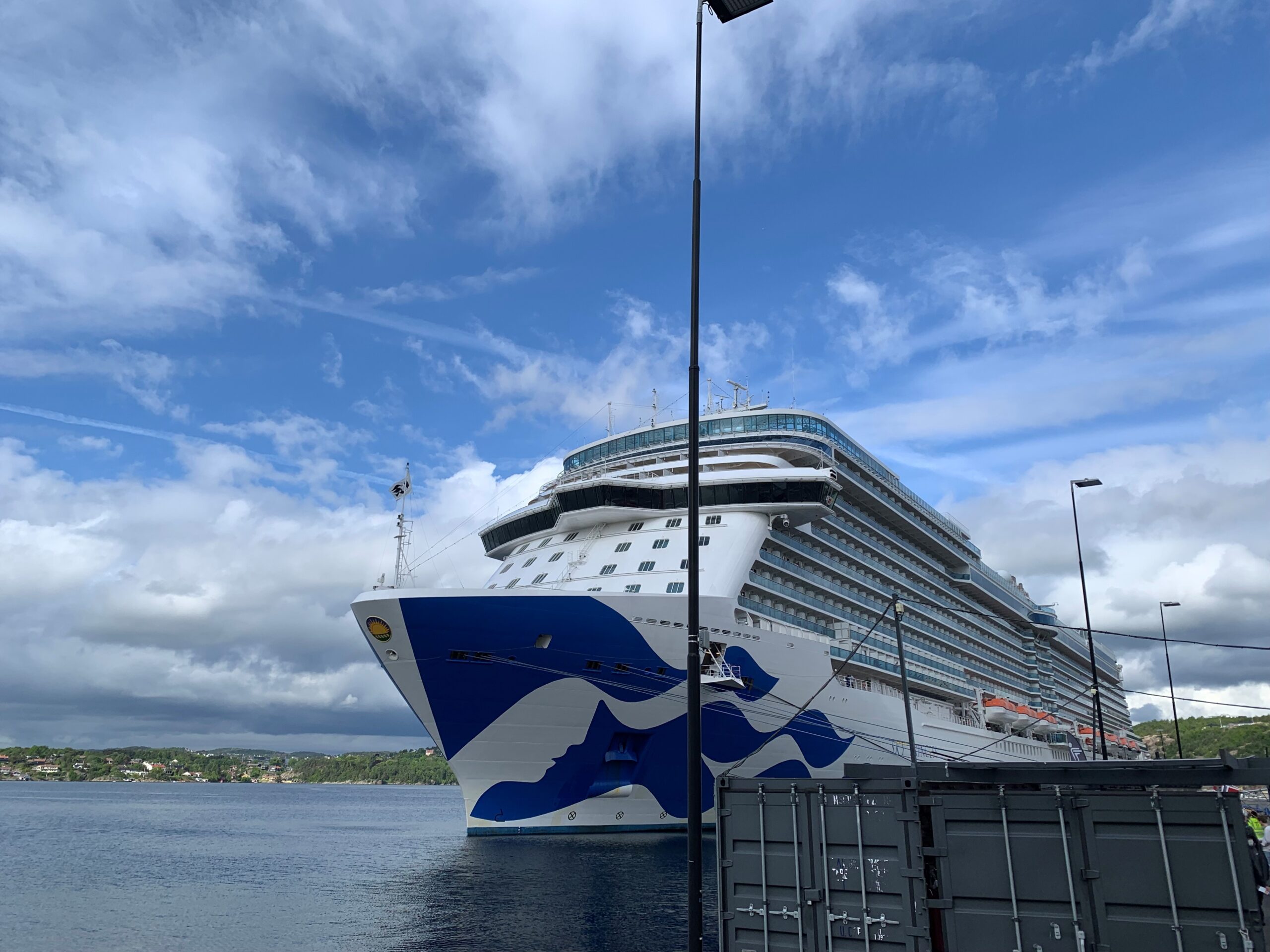 During June half term, I sailed on the beautiful Sky Princess – while it was wonderful to say Hi To Sky it was the first time I have found a Princess ship to be lacking in some areas. That’s not to say there weren’t any positives; there were lots of things that were wonderful. Let’s sail into a balanced view of Sky Princess.

It’s a good job British people queue with patience because this was the first of a series of very long queues that we were going to stand in all week long. Passengers were required to show up at the terminal having already been tested, they were also assigned a boarding time to ensure that boarding was staggered. However, these boarding times were not checked nor were they observed (I am fully guilty of showing up before my boarding time). This led to a long queue that spanned the length of the terminal, it did move fairly quickly whilst I was standing in it but it did get worse as the day went on…It wrapped around the terminal by the time Travel Blog Jamie arrived and he spent a long time standing outside (good job it was dry).

Once inside the terminal, the green lane and blue lanes associated with medallion class ships were observed and those who had filled in all their details passed through the green lane considerably faster than those in the blue lane who had not filled in all the required documentation. However, there was one thing noticeably missing! There was no priority boarding for Platinium and Elite guests, loyalty was not rewarded in this instance.

There is no other way of saying this, Sky Princess is a positively beautiful ship. She has the timeless elegance of the other Princess ships. With a quirky modern twist, provided by bright bold splashes of blue, no doubt designed to pay homage to her namesake. The blue chandelier that glitters above the Piazza flows like the waves of the sea, and the hand-blown glass hot air balloons are a clever addition that provide a beautiful Instagram background, removing the wall to Princess Live has transformed it into a friendly welcoming entertainment space which is often bathed in light that is the signature Princess blue.

But there are some public areas that have been redesigned that simply do not work. Take Five is a wonderful concept but the seating has been poorly designed and it is nightmare to find a seat! At times, it also seemed to function as a corridor as people funnelled in and out of performances in the Princess theatre. Overall, this area is not a patch on Crooners! But Princess seems to have realised this as Crooners has been reinstated on Enchanted Princess.

Vista has had its bar reinstated in the redesign – on other Royal class ships the bar is behind a wall and not accessible to the passengers. But Princess has also made the bold choice to turn Vista into the resident nightclub. A decision that makes little sense when Princess Live is overflowing as there are simply not enough seats and Vista (a much larger venue) is half empty with a house band playing to very few guests. As you can see, seating was a common issue during this sailing. The ship was at full capacity and on an evening it seemed there were simply not enough seats for every passenger to be sitting in a public area.

These have not changed at all! And I see why they haven’t, why would you change something that is pretty much already perfect? They are large, airy and clean with plenty of hanging space for those who are over packers and the walk-in wardrobe provides additional space to get ready so you are not constantly getting in the way of your cabin mate.

Unfortunately, Princess has stuck with the shower curtain! However, they have made some improvements and it is nowhere near as clingy. Controversially the only thing I did not get along with was the ‘Princess Luxury bed’ it was just too soft for me. Despite having sailed Princess many times this was the first time I had experienced a ‘Princess Luxury bed’ I usually am in a bunk. But I was far from impressed…I actually prefer the firm mattress of a bunk!

The entertainment was led by the hilarious Paul Chandler Burns, I have had him as a cruise director on previous voyages which you can read all about here. His entertainment team did a brilliant job at leading quizzes and gameshows; they kept the audience endlessly amused throughout the sailing and even had the good humour to poke fun at themselves/the company.

The theatre entertainment on the other hand was very hit and miss! Rock Opera was one of the worst shows I have ever sat through and I am still wondering why it is called Rock Opera when nobody sings any opera…Plus, I felt second-hand embarrassment when the production cast were actually better singers than the so-called ‘guest tenor’. The comedian onboard was also mediocre, so mediocre in fact that I cannot even remember his name.

However, Chris Watkins ‘fireworks on four strings’ provided a show which was the perfect mix of skill, stunning classical music and personality. Gareth Oliver kept everyone laughing, with assistance from a few friends and the voyage was topped off by a brilliant performance by Elton John Tribute ‘This Ones For You’ who were comedic and charismatic with a generous helping of musical talent.

I will never be able to fault the quality or selection of food that is available on a Princess ship. Those who are regular readers of this blog will know that I have favourite foods which are only available on a Princess ship. So if you have Sky booked in the future I recommend the following things: hot chocolate at International Cafe, International Cafe as a breakfast venue (trust me it is elite), Alfredo’s pizza at any time of the day and fettuccine alfredo in the main dining room. Those things are the key to a very happy stomach.

If you are interested in speciality dining, I recommend Sabitinis onboard Sky Princess. Despite having sailed Princess Cruises many times I have never been in Sabitinis before, mainly because it looked like an old people’s home where people were sent to shuffle off the mortal coil…However, on Sky Princess, Sabitinis has been given a makeover and is now a sophisticated, relaxing environment in which to feast on Italian cuisine and experience attentive service. Plus at $25 for multiple courses, it really is a bargain!

So far all positive, right? Wrong! Dining was the only thing on Sky Princess that caused me to have a full-blown rant. But my rant paled in comparison to some of the outbursts my fellow passengers were having, it was getting downright ugly. Princess Cruises used to operate something called My Time Dining when you were ready to eat you went to the dining room, if it was busy they would give you a buzzer, the same way a restaurant would on land. This has been replaced by something called Dine My Way where everyone is supposed to make dining reservations on the Medallion class app.

There are two main problems with the new system. First, it is not made clear that you have to have a reservation and therefore when you turn up without one you are treated as if you are stupid. Secondly, the app would not let us make a reservation…No matter what time you clicked it claimed that the dining room was full, leading to many first-time cruisers thinking that they could not eat in the dining room. The result was that every night the dining room had a long queue of disgruntled guests! And for some reason, if you had a reservation you still stood in quite a long queue.

If you are sailing Princess in the near future I would recommend making a paper reservation with the crew in the dining room who will be more than happy to help you out. Despite the fact that this issue is easily remedied Princess Cruises has not actioned a solution and reports from Enchanted Princess this week say that you may stand in the dining room crew for as long as an hour. So don’t wait until you are hangry! Start queueing early for that main dining room experience or visit one of the many other eateries onboard.

Princess Cruises market their ships as being smart ships! The idea is that you wear an Ocean Medallion which is approximately the size of a 20p piece. The Ocean Medallion keeps track of where you are, who you are travelling with, what your likes are, and what your dislikes are and also performs handy functions like opening your cabin door as you walk towards it. The Ocean Medallion works in partnership with an app on your phone; which conducts a number of functions the most popular of which is being able to order food and drinks wherever you are.

Now Sky Princess was not my first Medallion class ship, I had sailed on ‘smart’ ships on two previous occasions and had not rated the experience. However, on Sky Princess, I was pleasantly surprised by how well this functioned! There was a handful of occasions where the app struggled as the ship was at full capacity. But generally speaking, the ordering function worked really well, the crew were able to find you and address you by your name. My cabin mate used it to track my location and found me with ease thanks to the Ocean Medallion I was wearing on my wrist. The cabin door sprung open as you approached, ensuring that the cabin was easily accessible even if your hands were full.

The technology received a great amount of criticism while I was onboard but I think it has great potential. Especially if you are on a ship that was built with medallion technology onboard and was not retrofitted.